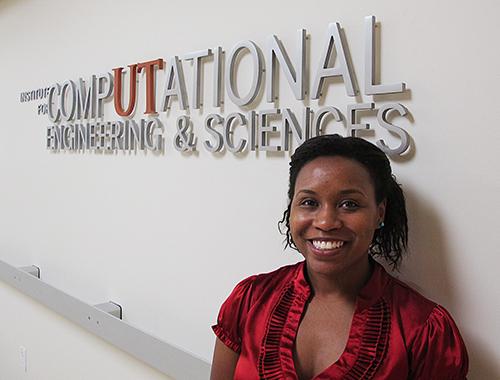 Talea Mayo experienced a lot of firsts while a graduate student at ICES.

She traveled to Saudi Arabia to conduct research at the King Abdullah University for Science and Technology; she started long-distance running and strength training, finishing multiple marathons (“living in Austin made it easy to train and race,” said Mayo); and she overcame mathematical problems that challenged her in ways she had never before experienced.

For the institute, Mayo holds another first. She is the first African-American student to earn a Ph.D. from ICES’ Computational Science, Engineering, and Mathematics (CSEM) graduate program. She successfully defended her dissertation this fall.

“It’s 2013, so in a way you don’t want to be the first black person to do anything. But we have to start somewhere. It’s nice that it’s here at ICES,” said Mayo.

Supported by research grants and a National Science Foundation graduate research fellowship, Mayo enrolled at UT in 2008 after earning her undergraduate degree in mathematics from Grambling State University. She was not sure what she wanted to study, but knew that the many research centers and groups in ICES would help guide her.

“I didn’t really know what I wanted to do but I knew that ICES provided the opportunities for me to figure it out,” said Mayo.

“Doing work related to natural disasters is very appealing to me because they affect so many people,” said Mayo, who personally saw the devastating impact of Hurricane Katrina on the lives of classmates from New Orleans at her undergraduate alma mater in Louisiana.

“My big picture goal is that models will be so good that when you tell people to evacuate they will listen because they will believe the forecasts. Anytime you’re improving your model you’re making real time forecasts better.”

Mayo continued her research as a postdoctoral research associate at Princeton University. Working with civil and environmental engineering professor Ning Lin, Mayo developed probabilistic hurricane storm surge models that may help inform protective hurricane measures for areas including lower Manhattan. After all, when Hurricane Sandy’s winds subsided, it was the water from the storm surge that shut down the subways and the streets and caused the damage that will take years to repair.

In 2015 she accepted the position of assistant professor in the Department of Civil, Environmental, and Construction Engineering at the University of Central Florida in Orlando, Florida.

Mayo now envisions herself using math to help people. But what initially drew her to the research was the subject of math itself.

“It was definitely math first. I have always liked math. I enjoyed doing it. And even if it was hard for me I was able to eventually figure it out,” said Mayo.

However, she began her college career as a criminal justice major, partly because she was unaware of career options for a math major. Mayo says she wants her work to have an “outreach component,” that showcases the tangible applications of math in the real world through computational science.

“People see what you do, and how it affects lives and then they see that your degree is in math. I find that very rewarding because until then they never understood that math is behind it all,” said Mayo, who participated in an outreach to Austin’s black community and youth with the Black Graduate Student Association at UT as well as her sorority Delta Sigma Theta.

Currently there are very few black people in math and science fields, especially computational science. Motivated by this fact, Mayo says she plans to work toward a professorship.

“Initially, I felt like after graduate school I wanted a job in industry. I was ready to stop climbing academic ladders. But I think that not having any black professors made a big difference to me, so now I understand the need for it,” said Mayo. “It’s a silent reinforcement that students from underrepresented groups should be here. ‘She did it, and so can I’.”

Succeeding in the program required facing constant challenges, said Mayo. She says her preliminary experience with advanced interdisciplinary courses and research was the first time she felt she had entered a situation where she was less than confident she could succeed.

But looking back, the rigor of the program is what made it worthwhile.

“It’s going to be hard. Expect it to be hard. Know that it’s not just you but it’s by design because that’s what’s going to make you better,” said Mayo as advice for future CSEM students. “So reach out and don’t isolate yourself. There are great people here and use that to your advantage.”