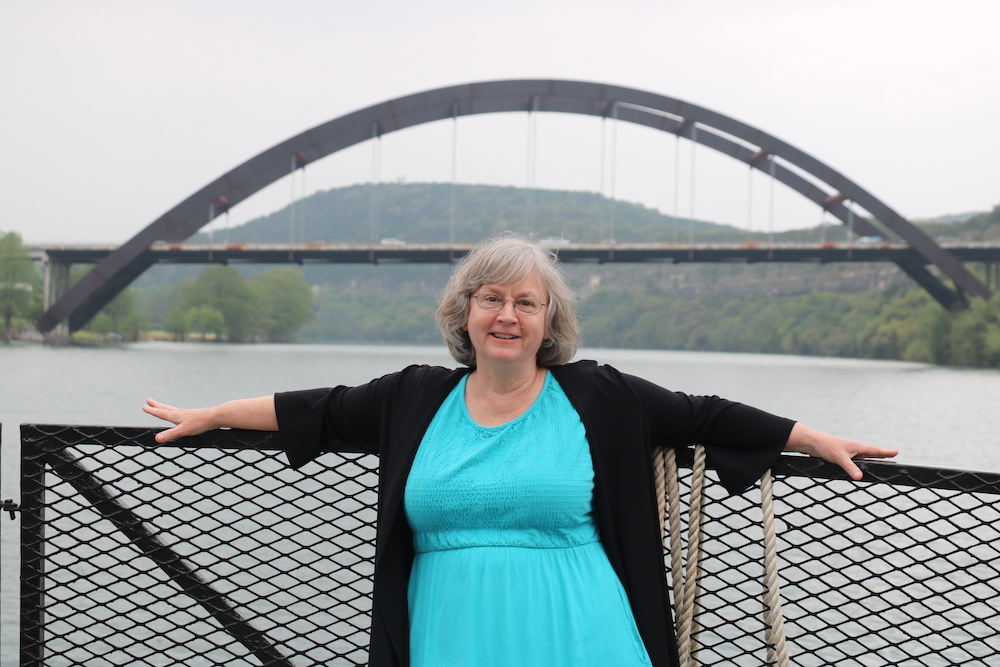 On March 31, 2022, Sue Rodriguez officially retired after working at the Oden Institute for more than 14 years. Sue's kindness, generosity of spirit and wisdom will certainly be missed by all who had the chance to know her, work with her and learn from her.

Rodriguez joined the Oden Institute in 2008 as administrative support for the new 5-year KAUST (King Abdullah University of Science & Technology)-UT Austin Academic Excellence Alliance, which was directed by Omar Ghattas. Once this program ended, she moved into the role of research administrator for several research groups at the Institute.

Long before joining the Institute, Rodriguez earned her BA in Spanish with minors in French and Romance Linguistics and a teaching certificate from the University of Michigan, and an MA in Foreign Language Education from UT Austin. Most of her career centered on international program administration and language training in university settings. She taught introductory Spanish and freshman English composition as a Teaching Assistant, held several administrative positions at UT Austin, and went on to spend 25 years in English as a Second Language programs at four US colleges and universities as an instructor and eventually as a supervisor and academic program coordinator.

Over the years, Rodriguez has assisted various faculty, including George Biros and Tan Bui-Thanh and their research groups. Rodriguez had been most recently assisting Patrick Heimbach’s Computational Research in Ice and Ocean Systems (CRIOS) group and Omar Ghattas’ Center for Computational Geosciences and Optimization (CCGO).

“I’ve learned a lot along the way about research administration including proposal submission, grant and contract management, event planning, sponsored project accounting, visas and international travel,” Rodriguez said. “For every challenge I came across, there was always a colleague willing to step in and help. The supportive, collaborative environment here is invaluable.”

Some of this support came from fellow staff members who have been at the Institute alongside her since she first started in 2008, including Lorraine Sanchez, Robert Hoelscher, Stew Stafford, Fatima Bridgewater and Charlott Low.

In 2019, Rodriguez earned an Outstanding Staff Award for her "outstanding dedication, competence, conscientious performance, excellent customer service, or ingenuity (which) has had a significant impact on the university."

“It is difficult to imagine how the CRIOS group could have gotten off the ground and flourished without her careful, dedicated and professional work in the background,” said Patrick Heimbach of Rodriguez. “Myself and the CRIOS group members are endlessly grateful to her.”

Rodriguez has a lot to be proud of from her time at the Institute. Not only has she clearly made an impact on the faculty, staff and students she worked with, but she also has felt “privileged” to be able to contribute to some of the crucial research on grand challenge problems at the Institute, such as Heimbach’s work on climate change and sea level rise, and Ghattas’ work on uncertainty quantification helping to predict disasters ranging from earthquakes to Covid-19 transmission.

One of Rodriguez’s most prized accomplishments was helping to launch and manage the KAUST-UT Austin Academic Excellence Alliance program for which she was originally hired.

“That program was identified as one of the Institute's most significant accomplishments. It was instrumental in developing the Computational Geosciences component at a new Saudi university, resulting in 18 initial collaborative research projects between UT Austin and KAUST, and bringing in significant research and gift funding that is still benefiting Oden Institute faculty and researchers,” she said.

Another proud moment for Rodriguez was the semester-long Exploring the Arctic Ocean exhibition at the UT Visual Arts Center in Fall 2018 that was put on by Heimbach’s CRIOS group. It was funded by an NSF grant awarded to CRIOS Senior Research Scientist An Nguyen and Heimbach to increase public awareness and interest in the effects of climate change on the Arctic. The group partnered with an expert curator and invited artists, photographers, and researchers from around the world to contribute to this ambitious outreach effort. “It was spectacular and unforgettable. It profoundly impacted the way I view our planet and our climate," she said.

Rodriguez had originally planned to retire in December 2019. “I turned 65 that year and I thought, ‘well, that’s what people do when they turn 65: they retire,’” she said. “I also had two young granddaughters, and my sister had been diagnosed with cancer, so the time seemed to be right to shift gears and focus on my family.”

As December 2019 approached, her sister was recovering (and is now in remission) and Rodriguez just didn’t feel it was time to leave yet. “I postponed retirement to December 2020, but when COVID-19 hit, I thought, ‘why sit around quarantining when I could be working remotely?’”

“Finally, December 2021 felt about right, but it took a while to find the right person to take over,” she said. “So, I stayed until we found a replacement, the wonderful Sarah Bialik!” Rodriguez’s last day at the Institute was March 31, 2022.

Now that she is officially retired, she hopes to learn how to garden, take some interesting cooking classes, possibly tackle learning another language, and travel. “I want to see more of the US and Canada, and I would love to visit New Zealand.”

Rodriguez is especially looking forward to having more time to spend with her friends and family, which now includes a third grandchild. “I'm excited to have the time to really get to know my granddaughters,” she said. “I'm eager to discover all the things we'll enjoy doing together. I raised two boys, so this time around I'm anticipating a little less Wild Kingdom and a little more Magic Kingdom, but we'll see."

“I’ve loved my time at the Institute. I’m grateful that I was given the opportunity to work with and get to know such remarkable people, and I’ll miss you all!”