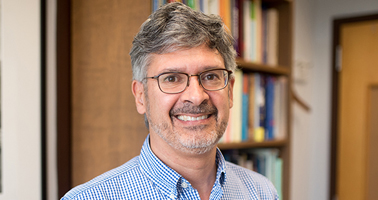 Professor Roger T. Bonnecaze is the William and Bettye Nowlin Chair of Engineering in the McKetta Department of Chemical Engineering at The University of Texas at Austin. He received his B.S. (‘85) from Cornell University and his M.S. (‘87) and Ph.D. (‘91) from the California Institute of Technology, all in chemical engineering. Between his M.S. and Ph.D., Dr. Bonnecaze was a project manager for Hydro Research Science working on environmental fluid mechanics and designing and testing hydraulic structures. After his doctorate, Dr. Bonnecaze was a BP Post- Doctoral Fellow in the Department of Applied Mathematics and Theoretical Physics and the Institute of Theoretical Geophysics at the University of Cambridge. He joined the faculty at The University of Texas in 1993.

He was chair of the John J. McKetta Jr Department of Chemical Engineering at The University of Texas at Austin (UT) from 2005-2013. The end of his tenure as chair coincided with his successful bid for the Nanomanufacturing Systems for Mobile Computing and Energy Technologies (NASCENT) National Science Foundation Engineering Research Center.  He recently stepped down as NASCENT co-director to co-found SandBox Semiconductor, a start-up company that uses computational simulation to accelerate the optimization of etch recipes for the microelectronics industry.  Sandbox was spun out of the NASCENT Center based on research by one of his PhD students, who is co-founder and CEO.

Dr. Bonnecaze’s research interests include nanomanufacturing modeling and simulation and computational fluid and solid mechanics for the prediction and design for the rheology and behavior of complex fluids.