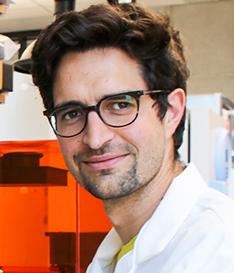 He is the principal investigator in the Soft Tissue Biomechanics Laboratory.

In May of 2020, he received the Moncrief Grand Challenge Award for his proposal titled ‘A Machine-Learning Based Training Tool for Tricuspid Valve Repair: A Prototype’. The objective of this proposal is to develop a prototype learning tool that incorporates all complexities of a human tricuspid valve and provides in-depth didactic insight into the effects of repair and device implantation on valve function. The outcome of this project will be a machine-learning based surrogate model that has been trained via high-fidelity finite element simulations. The finite element model itself will be built around a detailed cadaver study that includes all valvular and sub-valvular complexities. The surrogate educational model will be able to visualize the kinematics (i.e., competence) of the valve at minimal computational cost in comparison to a full simulation. Thus, the user will be able to change key valve parameters and learn their effect on valve function near instantaneously. This prototype will be a showcase for the potential of machine-learning based virtual training tools. It thereby holds the promise of aiding clinical training and reducing training-related morbidity and mortality.