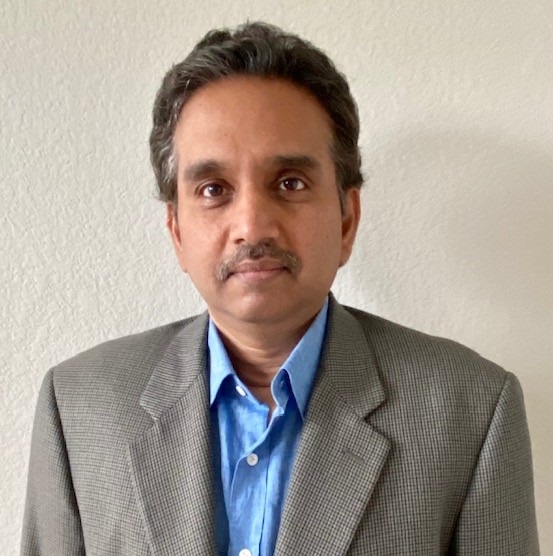 Computational science is an effective tool to better understand phenomena on the macroscale. Phenomena such as hurricanes or ocean current patterns. But as new Oden Institute faculty member, Dr. Narayana Aluru, illustrates, it’s just as effective for understanding all things micro, nano, and atomistic.

Small is the new big. Dr. Aluru and the Multiscale Nanotechnology Group he leads at the Cockrell School of Engineering are working on research that could solve some of the world’s greatest problems, including identifying diseases, advancing clean energy technology, and improving access to clean water. Despite the scale of the societal grand challenges he is taking on, his approach addresses them at the micro, nano and atomistic scale.

These challenges are especially relevant today, where COVID-19 and other diseases have raged uncontrollably, climate change and pollution have hindered farming, and lack of access to safe water has led to women and children walking miles to fetch clean water, especially in poor and developing nations.

Computational science and engineering has an important role to play in enabling advances in many other areas of societal importance.

Aluru has a personal connection to some of these issues. “I am originally from India [where] poverty is a big problem,” he said. “Many people do not have basic amenities like clean water, food, place to live, etc. Something like a pandemic causes disaster in a country like India.”

“Computational science and engineering has an important role to play in enabling advances in these and in many other areas of societal importance,” he added.

Some of the problems Aluru is tackling include biomolecule transport involving DNA sequencing and protein recognition, nanomaterials for ultrasensitive sensing, advanced materials for clean energy, and nanoscale fluid transport with applications in water desalination and separations.

Aluru’s research developing efficient sequencing of DNA and proteins using nanopores and related nanotechnologies could help with identifying the onset of diseases, like COVID-19. “Nanomaterials with exceptional physical properties could sense trace amounts (approaching attomolar concentrations) of pathogens, viruses and other important molecules,” he explained.

Another project Aluru and his group are working on is to develop systems that can cheaply and efficiently produce clean water. “For this we need energy efficient materials, and our work is helping identify materials that can quickly desalinate water,” he said. “Clean water is an important societal problem and energy efficient water filtration using nanomaterials could solve water crises in many parts of the world.”

Regardless of the problem, Aluru aims to understand the physics and mechanics as deeply as possible, to look for new phenomena, and to develop mathematical models and multiscale approaches to describe new phenomena at small scales. “The focus of Multiscale Nano Group is to develop multiscale approaches combining quantum to atomistic to coarse-grained to continuum scales to tackle emerging and important problems in nanotechnology,” he said. “Our goal is not only to understand the new physics arising at small scales, but also to translate that into devices and systems that are societally important and we can’t do it without multiscale computational methods.”

Aluru is looking forward to utilizing the many resources offered at UT Austin and has formed the new Multiscale Engineering, Mathematics & Sciences Group at the Oden Institute. In addition, he is already capitlalizing on access to the supercomputing power at Texas Advanced Computing Center (TACC) as a regular user of Stampede2 and Frontera, hosting 1,736 and 8,008 compute nodes respectively.

Dr. Narayana Aluru’s first exposure to computational science was as an undergrad working on a research project. He enjoyed this project so immensely that he decided to pursue computational science and engineering further through graduate school and beyond. After earning his Ph.D. in Civil Engineering from Stanford in 1995, Aluru worked as Postdoctoral Associate at MIT. He comes to UT after serving 23 years on the faculty at the University of Illinois at Urbana-Champaign. Aluru joined both the Walker Department of Mechanical Engineering and the Oden Institute as a core faculty member.

While Aluru’s Bachelor’s, Master’s, and Ph.D. degrees are all in the field of civil engineering, he found himself interested in mechanics and computational science early on. “Starting from my PhD days, my interests have always been to study mechanics beyond the classical setting; first it was semiconductor physics at micro and nanoscale, then microelectromechanical systems and microfluidics during my postdoc, and nanotechnology/nanomechanics over the last 20 years with computational science at the core.”

Professor Oden is a household name in the computational mechanics community.

“The opportunity to collaborate with so many outstanding faculty who are pioneers in computational science was a significant factor in my interest in joining the Oden Institute.”

After only a few short weeks at the Forty Acres, Aluru has been truly impressed by the breadth and depth of computational science that happens at the Oden Institute. “I am not sure if there is any other place in the world where so much computational science and engineering research happens in one building,” he said.

Outside of computational science, Aluru has many interests, ranging from understanding the origins of life and aging, to solving poverty in developing countries. He also enjoys playing and watching cricket. “I used to play cricket with my grad students, but now I am not able to keep up with them (they are far better than me!), so I mostly watch and play less.”