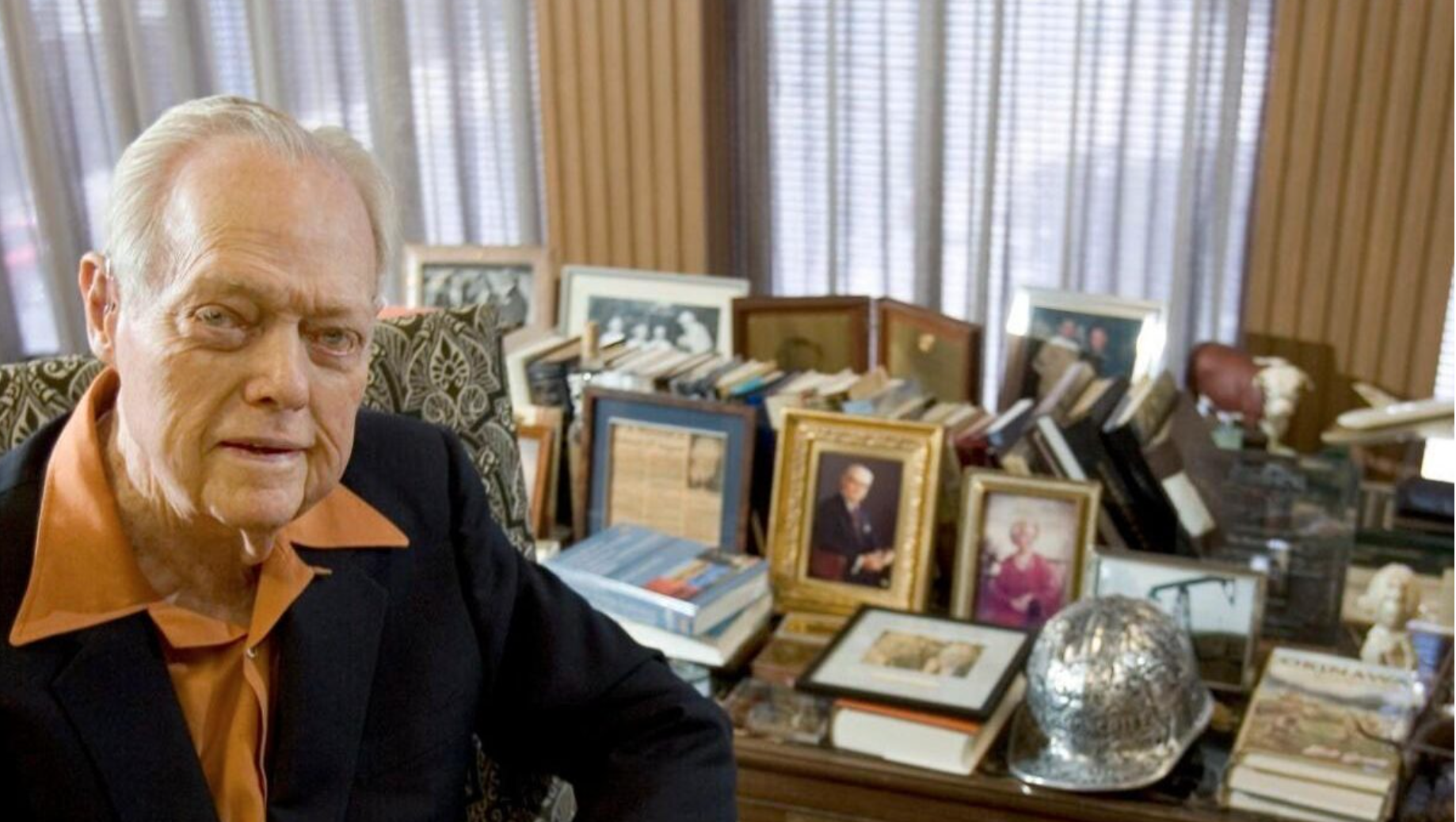 UT Austin mourns the loss of one of its longtime supporters, William Alvin “Tex” Moncrief Jr., who passed away on December 29, 2021 at the age of 101.

A pivotal figure in the establishment and expansion of computational science and engineering research at the University of Texas at Austin, Moncrief also provided significant financial support to numerous other programs across campus - from architecture and athletics, to history, fine arts, law and natural sciences.

A great friend and supporter of the Oden Institute, Moncrief was an early advocate for the potential of computational science and engineering to solve the world’s scientific grand challenges.

In 2009, the establishment of the W.A. “Tex” Moncrief Jr. Endowment in Simulation-Based Engineering and Sciences became an initiative that helped fund numerous faculty positions in the Oden Institute, and solidified UT Austin’s reputation as a world-class institution for computational science and applied mathematics research.

Moncrief’s support was central to the development of several other key programs at the Institute, including the Moncrief Faculty Grand Challenge Awards that provide core faculty with release time from teaching for a semester to take on high-impact research projects; the establishment of the Institute’s Visiting Faculty Fellowship Program; as well as the Moncrief Summer Internship Program , which offers funding to undergraduate students performing research in computational science and engineering.

“With the passing of our beloved benefactor, William A. “Tex” Moncrief Jr., we have lost not only a great supporter of UT Austin, but an especially dear friend of the Oden Institute,” said the Oden Institute’s Founding Director, J Tinsley Oden.

A great friend and supporter of the Oden Institute, Moncrief was an early advocate for the potential of computational science and engineering to solve the world’s scientific grand challenges.

Moncrief was born in 1920 to a family of legendary wildcatters. The Moncrief family was a part of many major historic oil and gas discoveries in East and West Texas, the Gulf Coast, Louisiana, New Mexico and Wyoming. Other significant discoveries included the Long Butte and Madden Deep units in the Wind River Basin, the Tepee Flats and Cave Gulch.

After his graduation from UT (B.S. 1942), Moncrief went to work for the aviation company Consolidated Vultee and then as an engineer for Stanolind Oil before joining the Navy when the U.S. entered World War II. In 1945, he returned to Fort Worth and joined his family’s oil business, running Moncrief Oil for several decades.

Appointed by Texas Gov. Bill Clements, Moncrief served on the UT System Board of Regents from 1987 to 2003.

Moncrief also served as president of the William A. and Elizabeth B. Moncrief Foundation, contributing to educational, health, civic and cultural organizations in Texas, including to The University of Texas Southwestern Medical School, The University of Texas MD Anderson Cancer Center and Campbell Memorial Hospital, in addition to his many contributions to UT Austin. In 2001, he was inducted into the Texas Philanthropy Hall of Fame.

His gifts to UT Austin supported programs in architecture, athletics, the Briscoe Center for American History, engineering, financial aid, fine arts, law, business and natural sciences. “”Tex” Moncrief’s impact on countless students across our university and the entire UT System is enormous and everlasting,” said UT Austin President Jay Hartzell. “One of the giants in an industry that shaped our state, he stood out for his boldness and his example of giving back. The entire UT community mourns the loss of this Distinguished Alumnus, while also celebrating a life well lived.”

“In his philanthropy at UT, Moncrief made the same kind of bold investments that made him famous in business,” said Executive Vice President and Provost Sharon L. Wood. “His timely support for computational engineering helped UT recruit global leaders working across traditional academic departments to address some of society’s biggest challenges. His generosity transformed our university and world for the better.”

J. Tinsley Oden experienced this generosity first hand.  “I had the good fortune to visit and interact with “Tex” on several occasions,” said Oden. “In 2008 I visited the offices of the Moncrief Oil Company in Fort Worth: a particularly memorable and true fairytale moment in the history of the Oden Institute. Our other great benefactor, the late Peter O’Donnell Jr. had proposed to then UT Austin president, Bill Powers, a huge challenge of securing substantial matching funds for grants to the Institute over a three-year period that would finance several additional endowed chairs as well as other programs that now serve as the foundations for much of the activity and research output from the Institute.”

On that date, “Tex”, who knew O’Donnell well, having partnered with him on other philanthropic activities, matched the challenge.

“This remarkable philanthropy,” says Oden, “undoubtedly put the university at the forefront of research and academic study in computational science worldwide.”

Above a doorway inside the UT Tower there is a simple engraving that reads: “a university of first class,” a phrase found in the Constitution of the State of Texas, written in 1876 after becoming a state.

This phrase was to become a driving motivator for the philanthropy of “Tex” Moncrief in a life well and truly lived.

“We at UT Austin will forever be thankful and indebted to “Tex” Moncrief and his family for their extraordinarily generous support,” added Oden. “He was a great Texan and a loyal UT graduate who did much to help the Forty Acres achieve its mission to become a university of first class.”