The Queen of The North - Profile An T. Nguyen 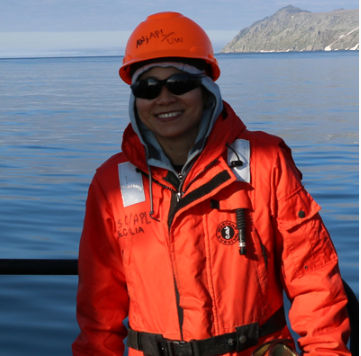 “I work a lot at night,” said Nguyen, an oceanographer in the Computational Research in Ice and Ocean Systems Group (CRIOS), whose research often takes her into northern waters. “Everybody goes to bed, and I function with a couple other people on the ship to collect environmental data.”

Nguyen’s ocean voyages have taken her to some of the highest latitudes amongst CRIOS researchers and earned her the moniker, Queen of the North.

“I would have to say, the most amazing thing to watch is the sun not setting,” she said. “It simply comes toward the horizon, sits there around 2 or 3 AM, and comes right back up. We get daytime for 24 hours and when the weather is beautiful, it’s absolutely magical. One time, we captured this incredible creature with tentacles - hundreds of them! It was this shiny orange beautiful color and it hugs on to your instrument, moving around like this,” Nguyen explained with a vigorous arm wave.

“I remember one time I saw jellyfish. They were big and they were so beautiful. You almost want to drop the instrument and take a camera to capture the photo but can’t because the instrument is very expensive and is the only one you have, so you can only observe as they swim by.”

The instruments that Nguyen uses to conduct research on the high seas detect everything from water salinity to the decibels of whale song. The latter is the only music available to her at sea, but far from it when she’s on dry land.

“Pre-pandemic, I would fly directly to Europe and join many friends to go to the operas. Normally, I would go for at least three to five shows of the same opera. I am absolutely passionate about early classical music,” she enthused.

The emotional transcendence of stories being told without words was enormously appealing to Nguyen as a young researcher in a new country.

“Being an immigrant and not very versatile with languages, opera and classical music was great. I was 21 when I first heard a piece of classical music and immediately latched onto it. It was love at first sound because somehow it communicates in a way that you don't need language.”

I do appreciate the bravery and the capability, the amazing training of opera singers. You could say scientists are the same because we spend an enormous amount of time working and training to achieve something.

The more she grew as a scientist, the more bridges she discovered to lay between science and music.

“I do appreciate the bravery and the capability, the amazing training of the opera singers. I suppose you could say scientists are the same because we spend an enormous amount of time working and training to achieve something.”

This window into her perspective illuminates why Nguyen attends multiple performances of a single opera: a researcher doesn’t end an experiment after a single trial. In each performance, the dynamic of an opera develops differently because, as Nguyen puts it, “the singer’s instrument is their body, so if one day they feel a bit different, the performance changes.” With each new instance of exposure to a body of work, the more fully she understands and appreciates its range.

“It is really magical to see them performing live and adapting. That’s something I try to emulate because in science we really need to be adaptive - we need to gain expertise from different fields and learn along the way.”