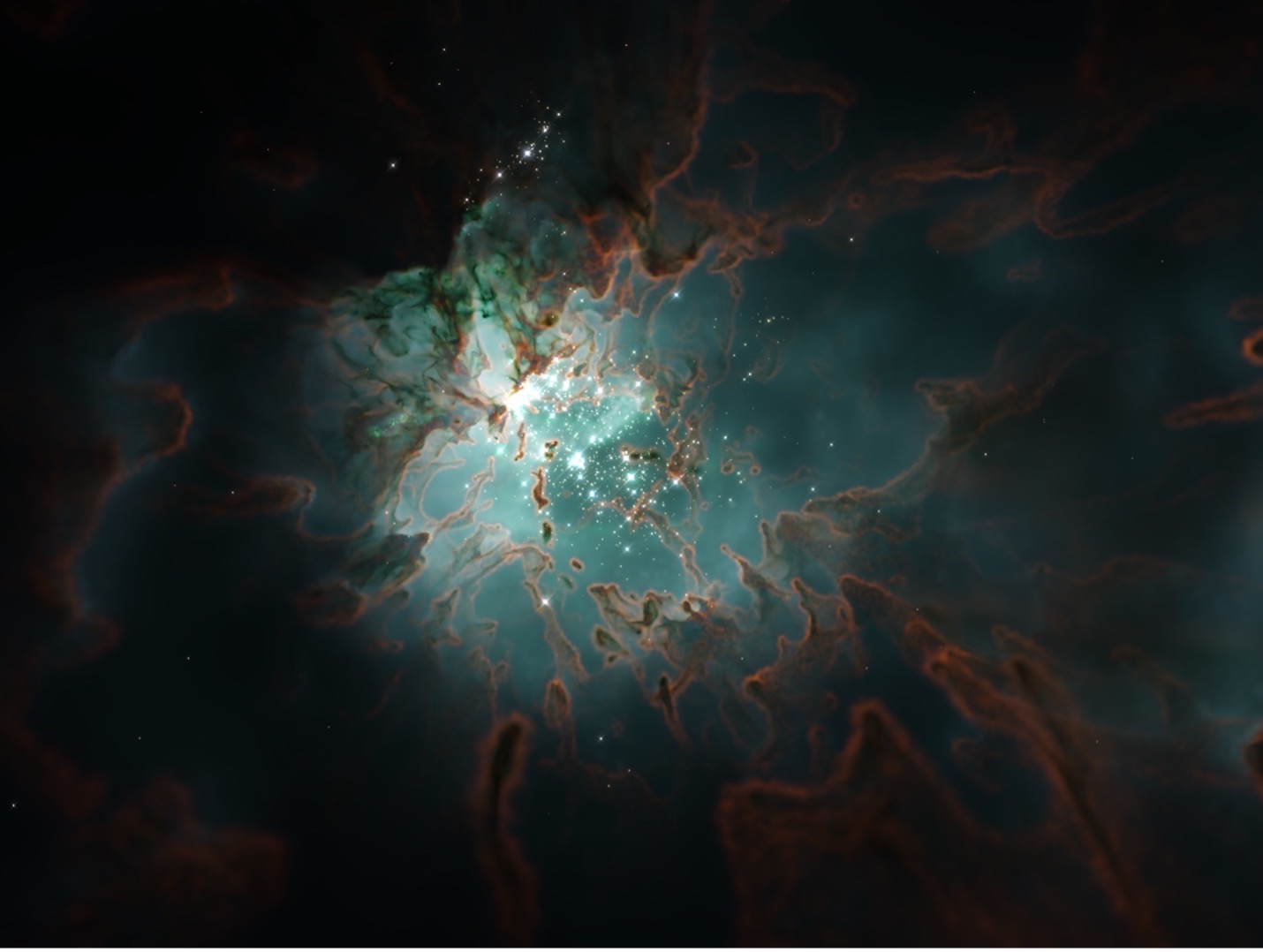 Scientists have uncovered what sets the masses of stars, a mystery that has captivated astrophysicists for decades. Their answer? Stars, themselves.

Using highly detailed simulations, a collaborative team led by researchers from the University of Texas at Austin has made a breakthrough discovery that star formation is a self-regulatory process, knowledge that may allow researchers to understand star formation within our own and far away galaxies.

The study was published in Monthly Notices of the Royal Astronomical Society. The collaborative team also included experts from Carnegie Observatories, Northwestern University, Harvard University and the California Institute of Technology.

Stars form within giant clouds that consist of cold gas and dust. Slowly, gravitational attraction pulls far-flung specks of this gas and dust together, forming dense clumps in which material falls inwards, compressing to high densities and producing heat: a newborn star.

Surrounding each of these “protostars” is a rotating disk of gas and dust. Every planet in our solar system was once specks in such a disk around our newborn sun. Whether planets orbiting a star could host life is dependent on the mass of the star and how it formed. Therefore, understanding star formation is crucial to determine where life can form in the universe.

For a long time, we have been asking why. Our simulations followed stars from birth to the natural endpoint of their formation to solve this mystery.

“Stars are the atoms of the galaxy,” said Stella Offner, an associate professor of astronomy at UT Austin’s College of Natural Sciences and Oden Institute for Computational Engineering and Sciences. “Their mass distribution dictates whether planets will be born and if life could develop."

Every subfield of astronomy depends on the mass distribution of stars — what we call the initial mass function (IMF) — which has proved challenging for scientists to be able to model correctly. Stars much bigger than our sun are rare, making up only 1% of newborn stars. And, for every one of these stars, there are up to 10 sun-like stars and 30 dwarf stars. Observations found that no matter where we look in the Milky Way, these ratios (i.e., the IMF) are the same, for both newly formed star clusters and for those that are billions of years old.

This is the mystery of the IMF. Every population of stars in our galaxy, and in all the dwarf galaxies that surround us, has this same balance, even though their stars were born under wildly different conditions over billions of years. In theory, the IMF should vary dramatically, but it is virtually universal, which has puzzled astronomers for decades.

“For a long time, we have been asking why,” said Dávid Guszejnov, STARFORGE project lead and postdoctoral fellow at the Department of Astronomy at UT Austin. “Our simulations followed stars from birth to the natural endpoint of their formation to solve this mystery.”

The STARFORGE Project is a multi-institution initiative, co-led by Dávid Guszejnov from UT Austin and Michael Grudic from Carnegie Observatories. The research was completed on two of the most powerful supercomputers in the world: Frontera and Stampede2 of UT Austin’s Texas Advanced Computing Center.

One of the greatest challenges in studying star formation is the enormous dynamic range of the problem, an example of which is stellar feedback: where individual stars can affect their parent clouds, which are 100 million times larger than they are.

“Even the largest supercomputer and best code could not cover the entire dynamic range, but TACC supercomputers are powerful enough that we can capture a sufficient amount to identify individual stars forming in the simulation.”

These simulations are the first to follow the formation of individual stars in a collapsing giant cloud while also capturing how these newly formed stars interact with their surroundings by giving off light and shedding mass via jets and winds, a phenomenon referred to as “stellar feedback.”

“We have discovered that star formation is a self-regulating process,” Guszejnov said. “Stars that form in wildly different environments have a similar IMF, because stellar feedback, which opposes gravity, also acts differently, pushing stellar masses toward the same mass distribution.”

The collaboration was funded by the National Science Foundation, NASA, the Research Corporation for Science Advancement, XSEDE, Northwestern’s Center for Interdisciplinary Exploration and Research in Astrophysics, and the Harvard Institute for Theory and Computation.

You can view this YouTube video of a 360-degree kinematic map of a star formation simulation from the STARFORGE team.