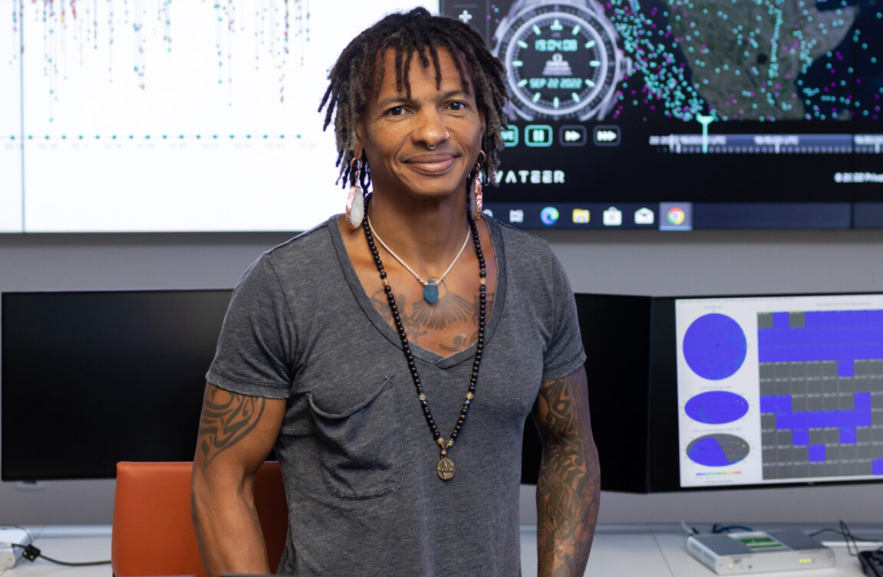 Moriba Jah, an astrodynamicist, space environmentalist, aerospace engineer, and core faculty at the Oden Institute for Computational Engineering and Sciences at The University of Texas at Austin, has been awarded a MacArthur Fellowship, often referred to as the “genius grant.” The award recognizes Jah’s work to track and monitor the more than 30,000 human-made objects orbiting the earth.

Jah is one of 25 individuals selected for the five-year fellowship — a no-strings-attached “investment in a person’s originality, insight and potential.” Recipients are nominated based on proven talent and extraordinary originality and dedication to their creative pursuits.

Jah, an associate professor in the Cockrell School of Engineering’s Department of Aerospace Engineering and Engineering Mechanics, and core faculty at the Oden Institute for Computational Engineering and Sciences, has developed tools for more precisely determining the locations and possible orbital paths of the active and inactive satellites, rocket bodies and other debris in space. This knowledge gives scientists a better picture of where objects are related to each other and when a collision could occur.

In tracking these objects, Jah and his colleagues have built complete catalogs of space objects in orbit. These tools — ASTRIAGraph and Wayfinder, a new version designed specifically for use by the general public — are online visualization tools, freely available to all, that integrate information from governments, industry and researchers.

“The orbital highways are getting crowded, and the services and capabilities that we depend upon are in jeopardy of being lost due to collisions from orbiting space debris, and it’s very difficult to predict where and when those things might happen,” Jah said.

Jah is an outspoken advocate for space environmentalism, a framework for treating Earth’s orbit as a finite natural resource that needs to be preserved and protected. Jah has proposed policies to create a circular space economy, preventing pollution in the form of single-use satellites and incentivizing companies to reuse satellites rather than abandon them.

In addition to his research, Jah is a co-founder and chief scientist at Privateer. His fellow co-founders in the private space venture are Alex Fielding, who co-founded technology company Ripcord, and Steve Wozniak, co-founder of Apple. Together they focus on similar areas to Jah’s research, collecting data on objects in orbit to allow space operators to move safely and effectively.

“Moriba is leading the way in one of the most important areas of space exploration — navigation in the increasingly crowded space above the earth and the prevention of more pollution in space,” said Roger Bonnecaze, dean of the Cockrell School. “He is one of a kind, and we are proud to have him in our Texas Engineering community, advancing space environmentalism and tracking orbital debris in new and incredibly impactful ways.”

This story was originally posted on the UT News site.