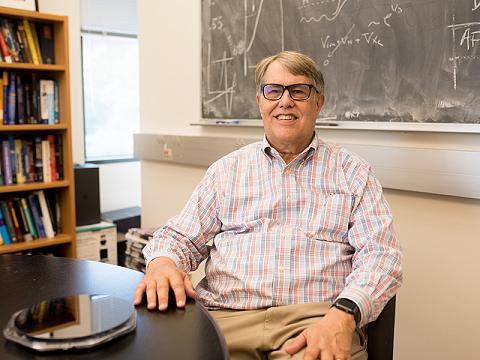 Since 1993, the Foresight Institute has awarded the Feynman Prize for Theory to the researcher whose recent work has most advanced the crusade for molecular manufacturing – pioneer physicist Richard Feynman’s goal for nanotechnology. This emerging technology would allow structures to be built with atomic precision, cheaply and in large quantities, through the use of molecular machine systems. The prize includes $5000, an invitation to the award ceremony and technical workshop, and public acknowledgment and support.

Professor James Chelikowsky has pioneered the use of computational approaches to understand and predict the properties of materials at the nanoscale. He was the first to exploit highly parallel computational platforms to solve for the electronic structure of dimensionally confined systems. His work has led to an understanding of the role of quantum confinement for a variety of properties such as diffusion of impurities in nanowires, the emergence of magnetism in iron clusters, and the self-purification of defects in nanocrystals.

Recently, he developed algorithms for solving the electronic structure problem for large and complex systems, including those containing over 200,000 atoms. His work in quantum theory, coupled to recent experimental advances in atomic force microscopy, has notably advanced Feynman's goal of visualizing and manipulating atoms in molecules and nanostructures.

“I am very pleased to be recognized by the Feynman Prize in theory,” Chelikowsky said. “My work has largely been guided by Feynman’s prescient view of nano- science and technology.”

Other winners of the 2022 Feynman Prize include Sergei V. Kalinin of the University of Tennessee, who was awarded for Experiment, and the 2022 Distinguished Student Award was awarded to Emanuele Penocchio of Northwestern University.