The presented work started with a convergence and stability analysis for the so-called full envelope approximation used in analyzing optical amplifiers (lasers). The specific problem of interest was the simulation of Transverse Mode Instabilities (TMI). The problem translates into the solution of a system of two nonlinear time-harmonic Maxwell equations coupled with a transient heat equation. Simulation of a 1 m long fiber involves the resolution of 10 M wavelenghts. A superefficient MPI/openMP hp FE code run on a supercomputer gets you to the range of ten thousand wavelenghts. The resolution of the additional thousand wavelenghths is done using an exponential ansatz e^{ikz} in the z-coordinate. This results in a non-standard Maxwell problem.

The stability and convergence analysis for the problem has been restricted to the linear case only. It turns out that the modified Maxwell problem is stable if and only if the original waveguide problem is stable and the boundedness below stability constants are identical. We have converged to the task of determining the boundedness below constant.

The stability analysis started with an easier, acoustic waveguide problem. Separation of variables leads to an eigenproblem for a self-adjoint operator in the transverse plane (in x,y). Expansion of the solution in terms of the corresponding eigenvectors leads then to a decoupled system of ODEs, and a stability analysis for a two-point BVP for an ODE parametrized with the corresponding eigenvalues. The L^2-orthogonality of the eigenmodes and the stability result for a single mode, lead then to the final result: the (inverse boundedness below constant depends inversely linearly upon the length L of the waveguide.

The corresponding stability for the Maxwell waveguide turned out to be unexpectedly difficult. The equation is vector-valued so a direct separation of variables is out to begin with. An exponential ansatz in z leads to a non-standard eigenproblem involving an operator that is non-self adjoint even for the easiest, homogeneous case. The answer to the problem came from a tricky analysis of the eigenproblem combined with the perturbation technique for perturbed self-adjoint operators. The use of perturbation theory requires an assumption on the smallness of perturbation of the dielectric constant (around a constant value) but with no additional assumptions on its differentiability (discontinuities are allowed). In the end, the final result is similar to that for the acoustic waveguide - the boundedness below constant depends inversely linearly on L.

Leszek F. Demkowicz is Assistant Director of the Oden Institute for Computational Engineering and Sciences and holder of W. A. "Tex" Moncrief, Jr. Chair in Computational Engineering and Sciences II. He is a Professor in the Departments of Aerospace Engineering and Engineering Mechanics, and Mathematics, at the University of Texas at Austin. He has a M.S. in mathematics from Jagiellonian University, and M.S., Ph.D. and Sc.D. degrees in mechanics from Cracow University of Technology (CUT). Dr. Demkowicz authored a co-authored several books, over 200 journal articles, book chapters and technical reports in the general area of computational mathematics and mechanics. His work and scientific interests span across numerical analysis, adaptive finite element methods, wave propagation problems, including acoustics, elastodynamics and electromagnetics, and CFD. 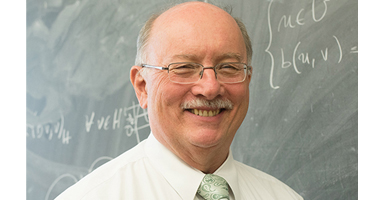