Home > About > News > Charting the Oceans, From Effect to Cause 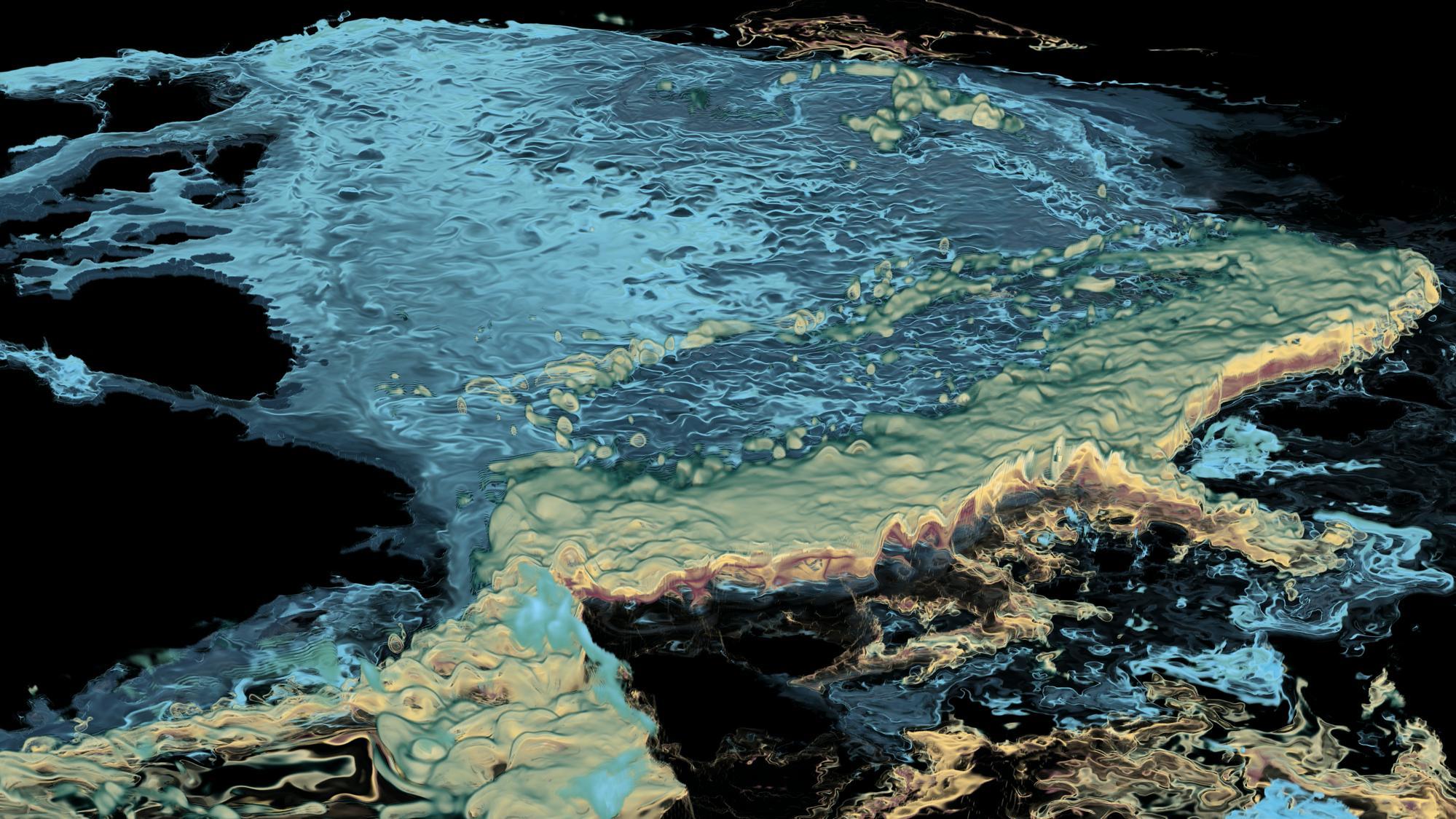 Charting the Oceans, From Effect to Cause

The global ocean circulation exhibits seemingly random, yet also highly organized motions, which oceanographers seek to understand for the purpose of developing skillful predictive simulations. Yet, changes in the ocean’s state, i.e., its temperature, salinity, sea level, and flow field are subject to numerous influences – from the Sun’s rays to the pull of the Moon.

Dr. Patrick Heimbach is a Professor at the Jackson School of Geosciences. He is a physical oceanographer and climate researcher, with recent excursions into glaciology. He is also a key faculty member at the Oden Institute for Computational Engineering and Sciences. Because, on top of everything else, he is a computational scientist.

“My main research interest is understanding the general circulation of the ocean, the dynamics of the marine (and marine-terminating) cryosphere, and their role in the global climate system,” Heimbach said.

As part of the “Estimating the Circulation and Climate of the Ocean” (ECCO) consortium, Heimbach and his research team use what are known as inverse methods. “We start with the effects to calculate the causes,” he added.

The group applies inverse methods, as well as related approaches, for the purpose of fitting a general circulation model to the Earth’s oceans. They also have lots of observational data to work with, although not nearly as many as their atmospheric science colleagues. “We use satellite and in-situ observations whenever possible to develop the most informed simulations of the time-evolving state of the global ocean and sea ice over several decades.”

Sparse Observations and an Ocean of Uncertainty

The group's overall goal is to help improve our understanding of ocean circulation variability, to quantify uncertainties that account for observation and model errors, to design optimal ocean observing systems, and to quantify the ocean’s role in global climate variability and change. Never short on new research, we look at two of CRIOS’s most recent studies.

Seafloor bathymetry map shows the undersea ridges found between Iceland and Scotland. The ridges intersect at the Faroe Islands, in green.

The ocean absorbs heat from the Earth’s atmosphere, which it then recirculates around the globe. Being able to measure such a phenomenon would significantly improve our understanding of the mechanics of the ocean circulation and its role in global warming.

Directly obtaining these estimates from measurements is complicated because oceanographers cannot measure the ocean everywhere. “Ocean measurements taken from ships or freely drifting instruments are expensive and difficult to obtain, especially in regions with ice cover or rough weather conditions.”

That’s Nora Loose, lead author of a paper published in the latest edition of the American Geophysical Union’s (AGU) Journal of Geophysical Research. Dr. Loose led the group in analyzing how existing measurements can be used to estimate unmeasured aspects of the ocean.

In the past, studies have used statistical correlations, but it is usually unclear whether correlations have a real, physical origin,” Loose said. “In this paper we introduce a new method.”

Using the Irminger Sea, just south of Greenland, as their reference point, the group replaced statistical correlations with correlations that have an underlying physical mechanism (see here for an ArcGIS StoryMap of their work).

“Our work reveals that a subsurface ocean temperature measurement in the Irminger Sea helps to better estimate poleward ocean heat transport across the Iceland-Scotland Ridge, hundreds of kilometers away. The two points exhibit physics-based correlation, which is created by a similar dynamical response in both regions to changes in the near- and far-field surface wind forcing.”

The framework developed is readily extended to larger observing networks, and to quantify which observational assets add uniquely new information versus those that may be redundant. It can be used to guide effective and targeted instrument placements in planned observing systems that the ocean community seek to sustain for extended periods of time.

The work originated in a collaboration with the Bjerknes Centre for Climate Research at the University of Bergen, Norway through a European Research Council (ERC) grant. Examples of where the team plans to apply its computational framework are in support of the joint US-UK “Overturning in the Subpolar North Atlantic Program” (OSNAP) and the “Sustaining Arctic Observing Networks” (SAON).

Geographic location of the Bering Strait, showing bathymetric #40;measurement of depth of water in oceans#41; contours based on ECCO Version 4 simulation software.

Computational scientists from the Oden Institute, along with colleagues at the University of Washington’s Applied Research Lab, are featured in the same AGU journal in the following issue. This time Dr. An T. Nguyen uses a coupled ocean-sea ice circulation model, calibrated to match existing observational data using advanced data assimilation, to investigate the key factors controlling the oceanic flow of water through the Bering Strait, a key oceanic gateway between the Pacific and Arctic Ocean that separates Russia from the United States, in Alaska.

Using adjoint modeling, a computational technique that “back-propagates” sensitivities of the model’s output to its uncertain inputs, enabled the team to derive comprehensive sensitivity maps of Bering Strait throughflow to atmospheric forcings in space and time. Of all the different forcings that the atmosphere exerts on the ocean, the study reveals surface winds over the interior Arctic Ocean have a greater influence on the amount of water flowing through the Bering Strait than winds coming from any other region of the Pacific Ocean or the Bering Sea.

“The connection between the winds and the flow through the strait is so strong that we find interannual changes in the wind patterns could be used to infer corresponding change in water flow,” said Dr. Nguyen.

The forward predictive and adjoint sensitivity modeling capabilities that are embedded within an inverse modeling framework open up the prospect for an improved understanding of the causes and mechanisms of flow changes at this and other important Arctic gateways.

The CRIOS group makes extensive use of high-performance computing, visualization, and data storage resources at the Texas Advanced Computing Center (TACC). The ocean model simulations and data assimilation have been conducted in various configurations on TACC’s Lonestar5, Stampede2, and Frontera systems. CRIOS is currently working with TACC to develop a data portal that will enable users to seamlessly access and analyze large volumes of model simulations. This access will be powered by both on-premise and cloud-based storage and compute resources.

Working with Greg Foss at TACC’s Visualization Lab, CRIOS members developed a visualization of mesoscale eddy-resolving numerical simulations of Arctic Ocean circulation that won an award for Best Scientific Visualization & Data Analytics Showcase at the international Supercomputing 2018 (SC18) conference. The visualization (pictured at the beginning of the story) was also featured by former NSF director, Dr. Cordova, during her presentation at SXSW 2019 of “Navigating the New Arctic”, one of NSF’s 10 Big Ideas.

"TACC has been instrumental in providing access to HPC resources during the 2019 ECCO Summer School on “Global Ocean State & Parameter Estimation: From Methods to Applications in Oceanographic Research” at the University of Washington’s Friday Harbor Laboratories," Heimbach said. "Each afternoon, 32 students from 10 countries worked through a range of numerical simulation and data analysis problems via preconfigured Jupyter Notebook containers that were powered by HPC nodes."

Looking toward increasing computational complexity through increased spatial resolution, the team plans to combine its inverse modeling framework with emerging approaches of scientific machine learning to improve and accelerate the simulation of physical processes, such as sea ice dynamics, and to leverage methods of formal uncertainty quantification. The group’s work is supported by NASA, NSF, and ONR.